So the last "unit" I did was back on the 12th of June, since then I've only done a few odd figures, brigadiers, and Vietnam stuff, not any proper units.


I started this back in February 2020, when I did the men at arms part of the unit.


Since then I've very slowly added the archer and gendarme part of the Ordinance Lance.


I was inspired by Stuart at https://stuartsworkbench.blogspot.com/, I feel he is THE guy when it comes to details on this period in miniature.

But he is doing Smaller scale actions with the rules he uses, I can't go into as much details as I hope to do full-sized battles, So my Company of Lance is a bit more abstracted. I also decided to have my archers as light lancers and not actual archers, it might be a bit wrong for 1510 battles, but seems that sometime between 1510 and 1525 the archers had become lancers. So I went for that.

This represents a company of Lances, so 100 actual gendarmes, but with the added men at arms and archers, somewhere between 300 and 400 actual combatants.

The Gendarmes are in the center, 4 of them. 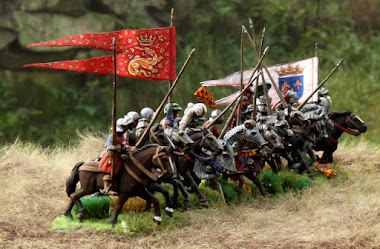 Flanked by 4 Men at arms, One of them a standard-bearer, that I did quite a lot of greenstuff work on.

The men at arms are again flanked by the archers, one of which is carrying a standard.

I have 4 other men at arms ready, so I need 4 more archers and 4 more Gendarme to finish another company of lances.  I need like 100+ in the end, and at this rate, I'll be done sometime after the sun expands into a red giant.

The Gendarmes are Steel fist and so are the archers, while the men at arms are perry plastics that I've Italian wared up.
Posted by Gunfreak at 1:40 PM

Well done GF- I like the distinction between the archers, men-at-arms and gendarmes.