It's my honour to present to you, an actual proper unit.

Well, it's been almost a year, (two weeks away actually) since last I did a proper full size 28mm unit, that was my British SYW grenadiers. Since then I've done some odds and ends, and these small scale skirmish things for Vietnam and WW2, and the Epic scale stuff, but they are so small they don't count.

But here I can now finally present you with a proper-sized 28mm unit.

A full-sized Spanish pike and shot formation, 39 figures, 15 pikemen and command, 24 arquebusiers, and musketeers. All 39 figures are unique, not a single duplicate. I started these like 18 months ago I think, did the pike center, and 1 base of arquebusiers, but then the arquebusiers fell on the floor and 4 figures fell off, weapons bent, and paint flaked off. I lost complete interest in continuing on them. But I decided to take them out and finish them, those that fell to the ground needed literally 15 minutes of work to fix. Yet it had held me back from finishing them. I then did the remaining 18 shot figures.
The 1898 figures are lovely, my only complaint is the swords, they are kinda hard to make look good, as they are attached to some stuff from the molding process. and they don't sit very well on the belts when glued on. But the figures themself are excellent, good character without them becoming some grotesque parody of mid-17th-century soldiers. 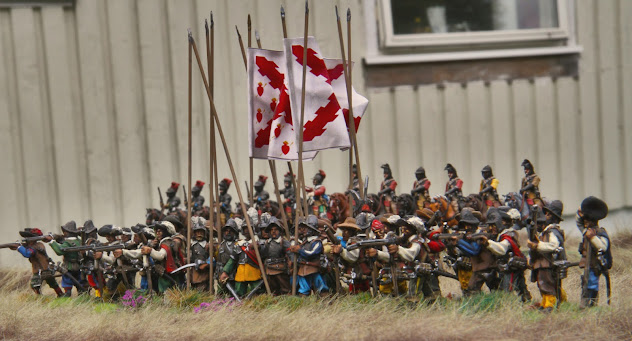 I still have enough pikes and command do to another pike base, but no more shot, I'll go take a look at how many avanpost musketeers I have, I might be able to use those, even tho I break half of them before they are finished painting. 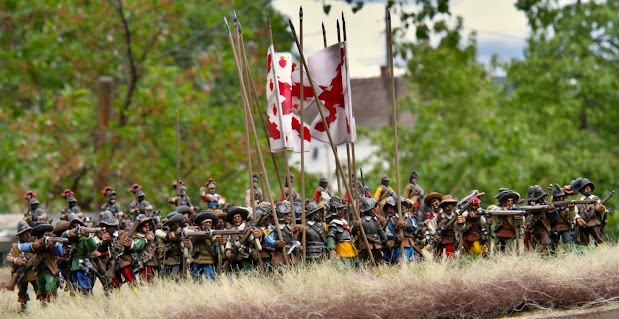 I kept to mostly brown vests/jacks, with mostly white shirts, some times I had a little colour, some of them look like they could be in cloth jacket, so I painted them with more colour, some arms are clearly jackets with cut arms, so there I again added colour with white shirt seen in the slashes. Trousers are anything from brown and beige to more colorful stuff. buff coats on the pikemen and some buff vests on the shot.

I still haven't found any clear concise info on just how a Spanish Tercio looked in the 1630s-1650s Most likely they were not these huge 2500-3000 man behemoths. But just how they deployed I do not know, if they still tried to use 4 sleaves on a pike block or if they more or less looked like the dutch system at this point. Just because it's called a tercio doesn't mean it actually looks like the original ones.
They were still called Tercios when they were 5 deep lines of just musketeers during the Spanish succession.

Yeah and I'm a clutch.