Project get it done damnit has met its 3rd and 4th goal.

The Saxon Cavalry brigades are done, I felt it wouldn't be as impressive with just 1 cavalry brigade, so I did the brigaders for both at the same time. Two average-sized brigades of 4 BLB squadrons each.

Given the performance of the Saxon cavalry against the swedes, I might have been too generous in their quality 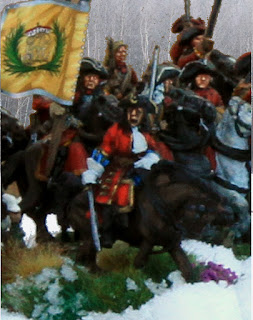 The next brigade will take a little longer to do, as I've decided to finish the Danish battalion of Fynske. I have 1 base done from long ago, so I'll finish the battalion before pictures are taken.

Project get it done damnit has met its second goal.  Another brigadier done which completes the brigade. 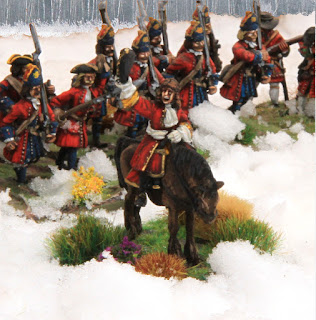 Project get it done damnit has met its first goal.

I finished up a battalion from Semenovsky regiment, I started this one over two years ago. And that will let me say I'm done with my Russian brigade for my GNW project. I have enough unpainted Russians for another brigade. But that will have to wait and wait.

I now have  12 battalions for my Anti-Swedish Leauge army. But I'm missing a bunch of brigaders. So in the coming weeks, I plan on finishing the brigadiers and show their brigades. With their Beneath the Lilly Banners points.

So first up is the Russian brigade, led by Brigadier Golitsyn. 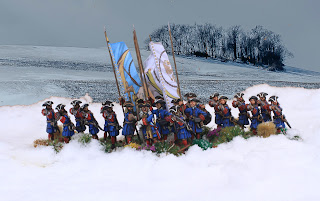 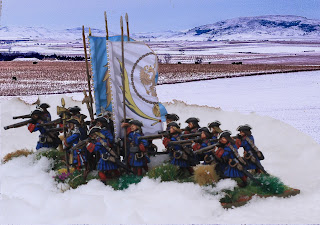 Next brigade up will be the Saxons.

First unit of the year and looking back.

I've not done much with this blog, after getting thrown out of TMP, views are way down, so I mostly use the blog now to have a place to hotlink pics from and keeping track of what I've actually been doing.

Most of my 28mm is black powder period-specific, with most of it being either Napoleonic or SYW, but there is something other two, medieval,  Italian wars and Vietnam.

All my 10mm is black powder period, the war of Spanish succession,  Napoleonics and ACW.

The big let down was I was just 18 figures away from my SYW passing 500 painted,  but I lost my inspiration.

10mm was a new thing for me last year, with 3 projects, 10mm ACW(which I kinda fell off) 10mm Napoleonics and 10mm WSS. I found I prefer 10mm over 6mm, for me 6mm starts to lose the realism look, they are either not very real looking, or they look ok but are so fragile I can never make a unit with less than 40% broken bayonets. with 10mm you can get the massed look and still make them look like little people, both my Lancer 10mm and Van Dyck have multiple poses in the pack. so, in essence, they are just small 15mm or 28mm. That didn't have to make to many compromises.

I need to finish Friant's 2nd division, I'm only missing 5 and a half battalions. and 2 howitzers, some skirmishers and leaders. in 10mm that's only about 15 days of painting. It's just about finding the inspiration.

The year has been filled with lots of stuff 2020 has affected us, the wife has been worked to death because of temporary management change at work and the pressure from COVID, we had a litter that turned out total shit, and ended in the worst possible way with having to put a 5-week puppy to sleep... it affected me a lot and I was not myself for many weeks after that, I just hind in ghost of Tsushima a game for the PlayStation 4, playing it for hours a day, so I didn't have to think about the loss.

But 9 weeks later, we had another litter, and unlike the first, here we got 5 strong wonderful puppies.
We kept two, Drifa and Jøkul. 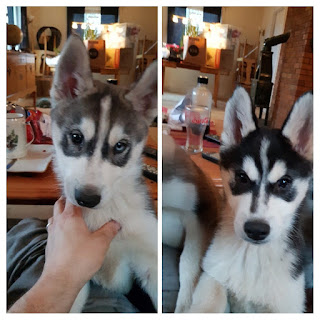 Jøkul to the left, a big dark grey boy, the last one born, Drifa to the right a black and white girl. 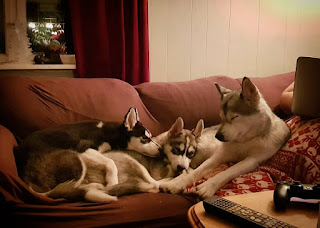 Here they are sleeping on the couch with their mommy Såga, I having been banished to the comfy chair. Their 3 siblings have all moved to Western and South Western Norway, all to great families.

We also did lot of work of the property, the basement (that once long ago was a garage) will be made into a proper dog room, the first step was to expand the room with about 6m2 putting down concrete floor and building brick wall and putting in 3 windows and a door. This was done by father in law with a little help from me, he also helped put up a 3rd dog yard and saving the roof of the annexe by taking out the rotten beam holding it up and putting in a new one.

So he was here helping us for about 2 months.

For Christmas, I got my first antique sword, wifte had gone to great lengths to hide it from me(swords being kinda hard to hide the shape of) So she added one of her colleagues to the conspiracy. The swords also had to get to the in-laws without me seeing it, so it got a trip on an express bus by itself. And then I had to go hunt for it in the basement washroom at the inlaws.

A 1796 infantry officers sword. Made between 1800 and 1807.
The first of at least 5 British Napoleonic Swords I plan on getting.
Then after Christmas, we had to make the tough choice and let Gaia go. She was 12.5, our oldest dog, mother of Såga and Orca and grandmother to the new puppies. She just didn't want to eat anymore.
She was a wonderfully funny little dog, a great mother to her puppies who she lived with every day for 6 and a half years. She had a great summer and fall, really enjoying herself. But it was sad.
Except for puppies, she was always our smallest dog, a tough little dame, who did not know her own limitations. Even when she had started to get old and not at good on the legs anymore, she would jump and climb, running to fast and falling over just jumping up not giving a crap. 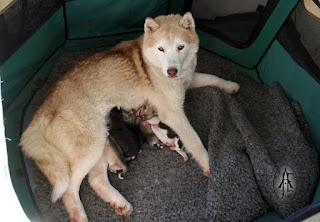 Gaia with her litter, 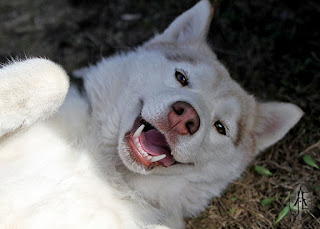 Gaia getting her belly rub, the only petting she actually enjoyed. 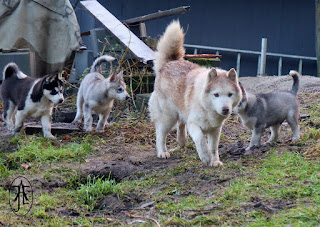 Gaia meeting her Grandpuppies, this isn't that long ago, maybe two months and she was just fine then.
And now, the first unit of the year.

His Majesty's Royal Regiment of Foot

The Allied force so far, 3 battalions and a couple of squadrons of Prussian Cuirassiers.
I have enough of these Van Dyck to do 5 more battalions, for the allies and 1 more for the French, And enough Pendraken cavalry to do a brigade of Prussian and a brigade of French.

Well, the unit for hell is done. I started this a year ago. But the damn figures are just to damn detailed, takes forever to paint, For the first 12 I used 6 layers of white and blue, but then I never finished. So I went down to 4 and 3 layers. But it still took forever. I felt after 18 where done. Originally I used the metal bicorne heads, but I gave up on my 1805-1807 project.

So 12 of them got the guillotine treatment and on with the shako heads. Still took forever to do, so I left, came back and did the voltigeurs, started on the last base, the command base, gave up again, after half finishing them. But I finally finished them on Saturday. But only because I forced myself to finish them before I could start on other Napoleonic stuff. If I remember correctly, I now have 3 french battalions, 24 cavalry and a cannon.

So now I'm gonna start on some Russian Jegers, I have 1 battalion done way back in 2015 done, and 24 hussars. So this battalion should finish the regiment. 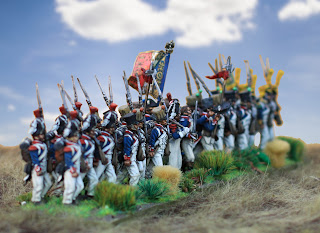 I made my life way to difficult for myself today. Using a white background when photoing Austrians... Two Squadrons of Erzherzog Leopold Cuirassiers, I hope to do all 6 Squadrons, so 36 figure regiment,

This regiment was highly needed for my Austrians, as they had very little cavalry support. Up next will be Baden-Baden infantry regiment and 4 companies of Horse Grenadiers. Figures are Minden and flag is Maverick Models cloth. 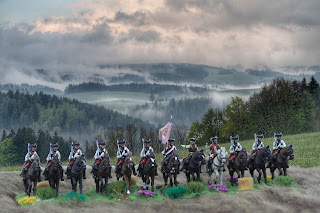 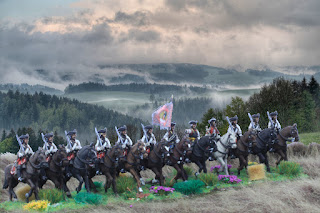 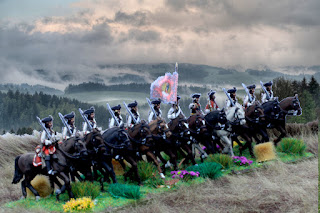 So I finally finished this battalion, like most of my units, its been in the making for months. I don't remember when I started on it, it might have been last year... 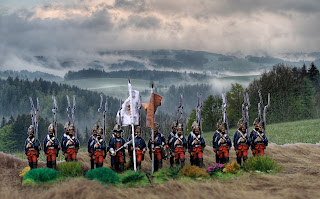 My Prussian force is now a whopping 3 battalions and a few squadrons of cavalry.

But overall my SYW project is now 318 infantry and 96 cavalry. This means my SYW is closing in on my GNW project in scale, and might soon become my main project in 28mm, it's only 8 infantry behind my GNW project, but about half of the cavalry, but more than twice the artillery. 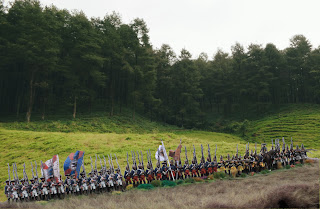 My infantry, Fredrick only has his brother's regiment, a fusilier regiment and a grenadier battalion to beat the Austrians with.