So some 15 months after starting the project, I'm half done!
This was my first goal when I started, I rarely do I get this far in my project, It's not a great force, 54 cavalry in 9 squadrons, 66 infantry in 3 battalions and 3 generals.
All the cavalry are Warfare, two of the battalions are also warfare, one of the battalions are Footsore/Musketeer miniatures. The generals are Ebor. All flags are warfare too.
At full strength, this would be 1800 infantry and 2250 cavalry.
The units are Småland cavalry regiment and a single squadron of Drabants.
Infantry are Jönkjöping, Björnborg and Kalmar.

The next half will be an almost mirror of this, with maybe an extra infantry battalion.
I know Gylldenstierna dragoons and lifeguard cavalry regiment will be most of the cavalry, while lifeguard infantry will have one battalion represented. I also think Västerbottens regiment will show up.

It looks  like quite a few figures, but really it's only 123. 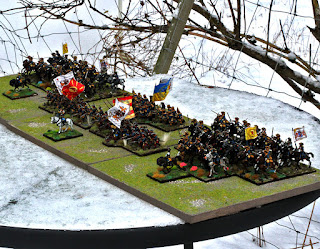 3 brigades, one of 24 cavalry, one of 30 cavalry and an infantry brigade of 66 figures. 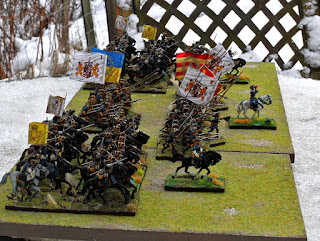 The big flags does help with the look! 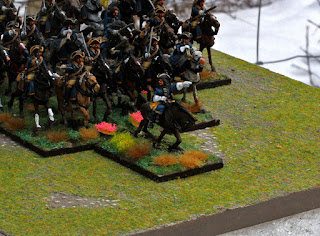 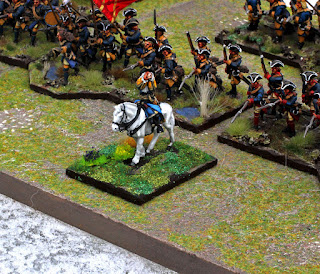 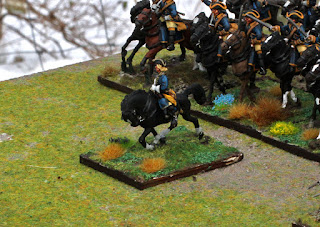 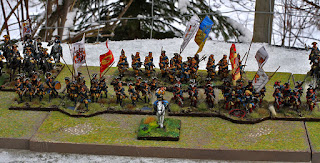 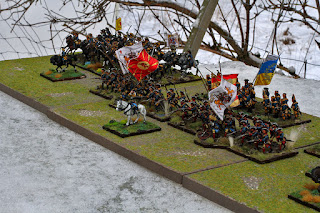 I'm now working on some footsore/musketeer miniature Russians, I'm not a fan of the figures, but I have 2 battalions worth of them, and that's like £60+ worth of miniatures, and I'm too poor to waste that money. Also, I have a battalion of Russians on the way from warfare, And so that will give me a brigade of Russians.

So half way there.
Posted by Gunfreak at 1:27 PM

They look FANTASTIC! Quality takes time. From the looks of it from these figures, whatever time you're taking is WORTH IT! Some more infantry and a touch of artillery and you're ready to put then in harm's way on the table top.

Really, really lovely looking stuff. If I might make a slight suggestion? Paint the edges of your flags to match the field colour.

Absolutley fantastic collection mate and I'm somewhat envious of the snow over there, nothing to speak of in rural Northumberland for four years now and I love the stuff!
Dave.

Yes, I've done it on some, then I forget about the others and don't remember it until I've taken the pictures and stowed away the figures again... and this keeps happening!

The snow only showed up last week. Before that it was every other week with ice or mud. Ice or mud..