Lets fight them on the beach.

Which is the noise these tanks made when they rolled off the assembly line, that's why they are called Churchills, true story.


I've decided to redo some WW2 projects, I was tired of the stupid out of scale infantry next to 1:56 vehicles, it annoyed me so much I stopped my Chain of command Market Graden project.
So now I've decided to do 20mm. Stuff is more in scale here.
First up is a Plastic Soldier Company Churchill.

I did the same as I did for my British 28mm Shermans.
Standard paint job, followed by various effects. 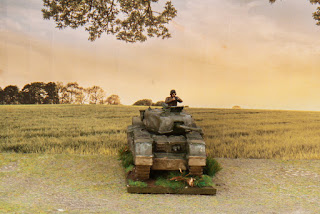 I went heavy on the dry mud, these are infantry tanks, they crawl along the dirt roads and muddy fields with the infantry. 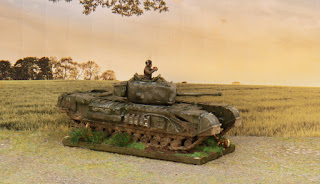 I plan on using it for Chain of Command but also Battlegroup seems interesting. So I plan on ordering those rules.
Posted by Gunfreak at 12:30 PM

Thanks, I've got more to show soon.